GENERAL Advice for Parents and Family
of Newly Diagnosed Children 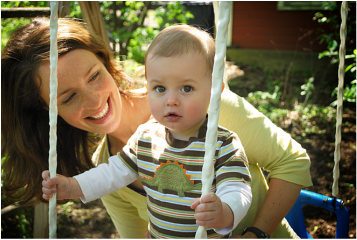 The time period immediately after your child is diagnosed is a rather intense search for answers and can be very emotional as you adjust to this knowledge. A parent I talked to compared it to "trying to drink from a fire hose." Here's some advice that my family and others wish we'd known back when our loved ones were first diagnosed. I may repeat advice given elsewhere in the website at times, simply because it's just that important.

"Different, not less" applies to parenting, too.

Parenting a child with autism is a different experience than parenting a neurotypical child; but that doesn't necessarily mean it's an inferior experience. One mother put her experience this way. "I went on a plane and thought I was going to Italy. Instead, I went to Holland. It's not a bad place; just a different one. You just have to buy a new guidebook." I paraphrased, but if you want to read her entire poem, you can do so here.

One of the first questions other parents of children on the spectrum will ask you about your child will consistently be "When was (s)he diagnosed?" If the answer is a low number (say, age two) you're congratulated and told your child has good odds to benefit from therapy. If the answer is a higher number (say, age eight), you may be consoled or the subject swiftly changed. So let's settle this right now.

Is an earlier diagnosis the ideal? Yes, it is, for many reasons. The one I like is that having a name really helps you learn about autism, and alter how you interact with your child accordingly. It can also help with getting services, like speech therapy, to help with communication. But that doesn't mean that your child is going to not benefit from therapy or not be successful in the long-term. My sister, for example, wasn't diagnosed until she was eight, yet still greatly benefited from therapy; I truly don't think she would be any different today had she been diagnosed earlier. Later diagnosis may also mean that your child was the signs of autism were harder to see. For example, the average age of diagnosis for children diagnosed with classic autism is four, but the average age of diagnosis for children with Asperger's is six (according to a 2008 CDC study).

Your child's autism is not your doing.

"What did I do wrong?" "What could I have done differently?" These feelings of guilt (often preceded or accompanied by denial or anger) are, unfortunately, common when a parent is first reacting to a diagnosis. Know this now: autism is not a result of parenting. Parents of children with autism can be, and are, as good as any other parent. You didn't do anything wrong, and, as hard as it is to admit, even if you could go back in time, given our current knowledge there really isn't anything you could have done to significantly decrease the odds of your child being autistic.

Caley and I talked to our mother several months ago about this very issue and found that - despite Caley being an adult now - she was still carrying guilt for fear that she'd caused Caley to be autistic. We assured her, as we just have you, that a) that's completely false, and Caley told her that b) even if she had caused her to be autistic (as my mother still feared despite our reassurances), she'd want her to go back and cause that all again, because Caley likes who she is. That's another big take away. There's a large Autistic pride movement, kind of like there's Deaf pride. So when they grow up, your child may actually LIKE being autistic.

Be cautious searching for a cause.

I discussed this already to some degree in Controversies, but it bears repeating. As I said before, I have read/heard about everything from autism being caused or encouraged by vaccines, gluten, cell phone radiation, certain types of sugar, GMOs, thimerosol/mercury (in a separate vaccine controversy), traumatic births, childhood illnesses, and even - in one case - a spider bite. There are so many purported environmental causes of autism that it is HIGHLY unlikely they are all true. The only one currently agreed upon by almost all parties is that there is a genetic component of some sort, but even the specifics of that are uncertain. So if someone tells you that something causes autism, take their claims with not only a grain of salt, but the whole salt shaker. If there are not multiple peer-reviewed studies supported by credible associations (read: WHO, CDC, etc), approach these claimed causes with extreme caution.

I'm not saying there's not one or multiple environmental component(s) (although if there is one, I will admit I don't know what it is), nor am I taking sides as to which one(s) that might be, but I am simply saying, be careful. Children have literally died due to parents' attempts to prevent them from having autism or to cure them based off of theorized causes. The stakes are high and what we stand to lose in our search for answers may be greater than what we stand to gain.

Moreover, though it may be tempting to hunt for a cause or a cure, the mere hunt can be rather demeaning to the child who is already here. My advice would be to put your energy into understanding autism from the autistic perspective and focusing on (main-stream) therapies to help your child navigate the world. You may not believe me now, but that path not only is more likely to be fruitful, but it's also more likely to help your child.

Children with autism have feelings.

This is one myth that consistently concerns parents the most, and small wonder. To think that your child is a robot, though completely untrue, can be a rather disconcerting thought. I will assure you now, autistic people have very real feelings and emotions (which I'm sure you've observed by now).

Furthermore, some people seem to have the idea that autistic children are incapable of love. That is completely false. To use my sister as an example, she is one of the single most loving people I've ever met, and definitely loves me and my parents. I have known hundreds of autistic folks now, and I have yet to find one who isn't caring. Don't question your child's love for you simply because they express it differently from other children.

Children with autism change and grow.

There is this feeling I get when people talk about someone on the spectrum or I read other educational articles. All too often they refer to the characteristics of persons with autism as though they are static, set in stone. This is one of the issues I have with the focus on autism being almost entirely on children. As with neurotypical children and adults, the autistic child and the adult they grow up to be will be different.

To use children with no speech or single words at age four as an example, about half of them grow up to have fluent speech and seven out of ten will go on to use simple phrases to communicate (read the full article I got this information from here). As this shows, the status of traits associated with autism is very dynamic, and the abilities of a child can be quite different from those of an adult. Just like neurotypical folks, kids on the spectrum grow and change.

This was covered already in Myths, but, as does much of the content of this website, it bears repeating. Just because other children or adults you meet act certain ways does not mean that your child will. Every autistic person is unique and their characteristics and outcomes vary wildly based on the individual case. Getting a general idea of what other children/adults with autism are like can be helpful, but know that your child will almost certainly differ from others in very meaningful ways. The saying goes if you've met one autistic person, you've met one autistic person. Meaning autistic people are just that different from each other that you can't meet one autistic person and claim to know about autism as a whole, you'd simply know what that one person was like.

You don't need to mourn.

My mother has told me that when my sister was first diagnosed psychologists told her that she needed to "mourn for her lost child." It wasn't optional; it was just something that parents of children with autism were seen at the time as having to do. That means my sister was being framed as lesser to a non-autistic child from the moment of her diagnosis. Since "different, not less" is practically my mantra, you can imagine that I disagree with this practice.

Don't let anyone make you feel like you have to mourn or as though your child is somehow lesser to the one you thought you would have. If you need some time to grapple with the diagnosis and come to grips with the fact that your child is autistic, by all means do so. You weren't expecting your child to be autistic, and adjusting to that fact can be understandably difficult. In addition, remember that an autism label is just that - a label. Your child is the same child you had before; the only difference is now you have a new name to help understand how they experience the world.

I know I already mentioned it in the Narrative section, but it bears repeating - I highly recommend reading Don't Mourn for Us, by Jim Sinclair, for the perspective of someone on the autism spectrum on this subject. Here's a brief preview: "You didn't lose a child to autism. You lost a child because the child you waited for never came into existence... Grieve if you must, for your own lost dreams. But don't mourn for us. We are alive. We are real. And we're here waiting for you."

If you've read all of the in-website articles already, I highly recommend checking out the outside resources - Diary of a Mom is written by the mother of an autistic and a neurotypical child, and Additional Resources will allow you to pick and choose any of the many resources given for further reading/viewing.