Here's a chart of the characteristics autistic people tend to have to get you started. 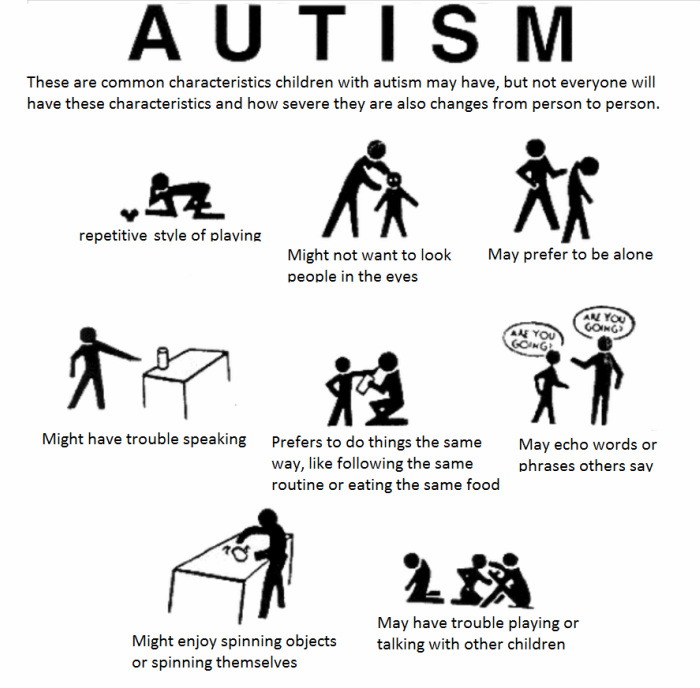 Not everyone will have these traits, and even if they do it may not be easy to tell. To use my sister, who is autistic herself, for an example, she echoed words or phrases and, while she loves spinning, you wouldn't know unless you asked her. This chart should give you an idea of some basic characteristics that many autistic people have, but it's important to remember that every autistic person is different.

Now let's move on to something more fun - watching videos from TV shows and movies about autism!

This clip, while it doesn't feature anyone autistic, is helpful for understanding how people with autism see the world. Not only can people on the spectrum not always use inflection in their speech/tone of voice, but they also don't understand it well. The following clip from Despicable Me is entertaining for most of us, in part because the characters only use one word for the majority of the clip - the word "banana." Most of us can understand what's going on in the clip (the emotions the Minions are feeling) simply by listening, but - as my sister pointed out - because autistic people have trouble with understanding tone, they would likely have trouble following what's happening in the clip without watching, which most of us can do with relative ease.

Here, the character Temple Grandin (based on a real person!) explains how being autistic affects her.

What to look for: Temple is very sensitive to sounds and can get overstimulated if people get too loud, which makes her feel bad. When she talks, it sounds very flat because she has trouble controlling how loud her voice is and speaking with a natural sounding tone of voice. She also talks about stimming (rocking, twirling, etc, like the girl who's spinning at the beginning of the cip is doing) and bear hugs (her hug machine) and how they can help people with autism feel better. She also points out that there are good things about autism, such as seeing patterns and details other people may not.

What to look for: Like a lot of autistic people, Sheldon has trouble making friends. Since he can't figure it out on his own, he's come up with a chart to help him do it. Because people on the autism spectrum have trouble figuring out social situations, a lot of times they'll do what Sheldon's doing and come up with rules like his friendship chart to help them figure it out. It works sometimes, but not always. For example, my sister has a rule that smiling always means a person is happy, but one of her teachers smiled when she was angry. My sister, seeing her smiling, thought she was happy, and that got her in trouble with the teacher.

Sensory processing problems affect every autistic person differently (and some not at all). Some people, the people experience their senses as being less than other people, need more sensory stimulation than others. They might constantly be moving around or jump a lot or like really loud noises. These people are called sensory seekers. Other autistic people don't want as much stimulation as others. They may cover their ears when it's too loud or dislike tags in their clothing, for example. No one is 100% a sensory seeker or sensory avoider - someone might be super sensitive to loud noises while not caring about tags in their clothing, for example - but most people are mostly one or another. Here's an example of what grocery shopping feels like on a bad day to someone who is mostly a sensory avoider.

DO NOT WATCH THIS IF YOU ARE SENSITIVE TO NOISE!
IT IS VERY, VERY LOUD!

Autistic people have trouble dealing with changes, especially ones that are unexpected and come without warning. That's understandable; if you're autistic, the world can feel like a kind of scary place at times and having a big change like that can be really upsetting.

What to look for:
Here, Sheldon talks about how he's REALLY upset because his roommate is leaving their apartment. Even tiny changes bother him - like how the strawberry drink is made with syrup, not powder (even though the syrup actually tastes better). For autistic people, changes feel pretty bad, and the changes actually get to be too much for Sheldon. Later on in the episode he tells everyone he needs to be alone for a while to deal with how upset he's feeling. Needing alone time is completely understandable!

Here, Sheldon gets upset because it's the day he normally eats Italian food at home, but they're going to eat different food in a different place instead. It's not just tradition to him, it's important to keep up the same routine....he's done the same thing for eight years! One time, in another episode, one of his friends made him some French toast - but since it was oatmeal day, even though it was really yummy French toast, which he likes, Sheldon threw it away and made himself a bowl of oatmeal instead. Keeping the same routine is important to most autistic people, and you can see that in what Sheldon does.

Not all autistic people speak verbally. Some, like my sister Caley, don't have trouble speaking unless they're really stressed. Most autistic people learn how to speak at least a little, although it may take longer for them to learn than other children and they may have a harder time with it. Some autistic people don't speak verbally at all. But that's okay, there are other ways they can communicate! If they're like Carley, who is a real person and the girl in the video below, they might type to communicate instead of speaking.
Others might point to pictures or use sign language to show what they mean, like this boy does:

Up Next: Famous Autistic People

A lot of the videos we just watched were from TV shows, but there are a lot of real life autistic people who are famous, too! Learn more about them in the next article!
Powered by

Create your own unique website with customizable templates.
Photo used under Creative Commons from madmiked