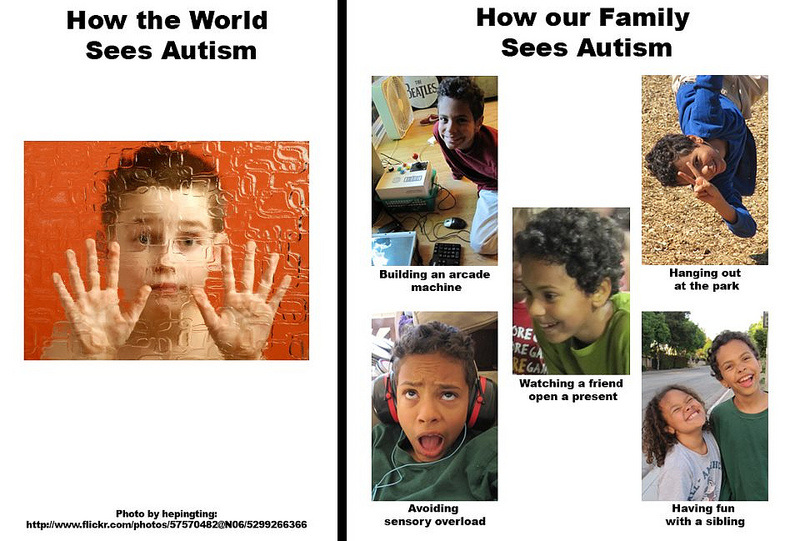 Caley and I encourage autistic people to be open about their diagnosis because in our experience there's a degree of protection from bullying that comes with the label, not to mention that openness can help educate others about autism. That said, these benefits come with a steep price because as soon as someone says they're on the autism spectrum, we categorize them and treat them differently. Don't believe me? We'll start off with a story of the stigma I've seen, and then move on to stories of discrimination told by others. Keep in mind as you read the first section that I'm not actually autistic myself.

My discrimination story begins in a place I really wish was surprising – an autism support group. I volunteered there for many years, caring for children during meetings. One day, a new mother came to the group, and brought her autistic son with her. I asked if I could care for him in another room, and was met with a flat out refusal. I was surprised. I’d been doing this successfully for a long time with many parents’ children and had never been met with anything but appreciation. Why now would this change? At the end of the meeting, the mother approached me in embarrassment, apologizing for not having trusted me with her son. Someone had been talking about another girl at the meeting who was autistic, she said – and she’d thought that someone was me.

In short, even this mother of an autistic child was judging me not by my actions, but by her stigmatized view of autistic people. The moment was made all the more painful because the girl the woman mistook me for? She was Caley, my Autistic sister.

I was the same person as I had always been, but as soon as she thought I was autistic this mother deemed that I was no longer trustworthy. I was being judged not by my actions, but by my label, and that was in a group of parents who are presumably more open and educated about autism than the average person. That's how deep the stigma of autism goes. Up until that point, I’d never really given much thought to the stigma Caley bore, thinking that people would just see her for who she was. It was a shocking moment for me when I realized that Caley had to confront that stigma every single day.

The stigma definitely exists, and we all buy into it to some degree. The only difference is that most non-autistic (neurotypical) people don't realize that they're treating a person negatively because of their autism label. In short, neurotypical people run the risk of using the autism label as justification for treating other people differently, for the worse.

We may not be able to change society's views on autism (although we can try!), but we can change and monitor our own. So when you interact with someone autistic, keep this stigma in mind. If you're aware of the stigma, you're far less likely to fuel or fall victim to it.

Judge people by their actions, not their label.

One of the reasons it's so important to combat stigma is because it breeds real-world discrimination. Here I've posted just some of the discriminatory acts that have targeted people on the autism spectrum.

- Disability discrimination at St. Rita School in Marin Co., California
"Emily Willingham attempted to enroll her autistic son at St. Rita School, a private school in California. She supplied documentation demonstrating that her son excels at his grade level academics, and did not need extra resources or "care" to participate in a typical classroom setting. The school rejected her son anyhow, because of his autism."

- Equal Employment Opportunity Commission Sues Employer for Discriminating Against Autistic Worker
After the worker disclosed his autism, all of a sudden the employer told him the job was filled...while still recruiting others to fill the position.

- Survey: Over a third of autistic adults report discrimination/bullying at work.

- Autism Discrimination Stories
This article includes the tales of countless parents and people on the spectrum and the discrimination they've faced in their lives. If you didn't think stigma and discrimination were problems up to this point, you will after reading this.

In short, stigma and discrimination are very real problems that people on the spectrum struggle with. It's up to us to fight back against this, whether it's by fighting against discrimination or refusing to feed into a stigmatizing view of autism.

Up Next: The World Needs All Kinds of Minds

Now that we've discussed the downsides of autism, it's time to talk about the up-sides. In the next article we'll be discussing the selective benefits of autism and we'll introduce you to a couple of high achievers on the spectrum and their take on the subject.
Photos used under Creative Commons from anotherlunch.com madmiked