This article presents the foundation that you'll need to understand autism. We're not going to dive too much into specific characteristics in this article (that's the next article), but, rather, the important concepts that underlie any discussion of autism.

I've tried to make a bit easier to understand through videos explaining autism - the first is a very short overview, and the second is more in-depth. View whichever works for your learning style/time constraints (or both!).

The Basics: What Is Autism?

Or, if you prefer to just read text, here's what the video says:
"What is autism?" Autism is a neurodevelopmental disorder. That means it affects both neurology and development. Because their neurology is different, autistic people experience the world differently their whole lives. That's why many people see being autistic as inseparable from who they are.
It's like comparing Windows computers and Apple computers. Yes, they both work differently, but it's not because of a processing error, it's because they're running a different operating system. It's the same with autistic people. Like the computers, both types of brains work, just differently.
As one autistic person put it, "Being autistic is like being left handed on the neurological level. Some things we can do readily or better than normal, some require a different tool to achieve the same result, and some will make us metaphorically smear ink on the paper."
​Autistic people have both strengths such as concentration, passion for special interests, attention to detail, and insight into patterns, and challenges such as social skills, communication, sensory problems, and trouble changing routines. In reality, though, many of the biggest challenges autistic people have don't come from their neurology. They come from the way society treats them as a result. Staring. Infantilizing. Shaming. Discriminating. Demeaning. Bullying. It's also important to remember that not only is autism a spectrum, but there are also spectrums within the spectrum. So if you've met one autistic person, you've met ONE autistic person.

There's a great video that some have said is helpful for explaining what it feels like to be autistic in a neurotypical society. I HIGHLY recommend watching.
Now that you have the broad overview, and a basic idea of what we're discussing, we'll go back through and lay down a strong foundation for building a more advanced understanding of autism, starting with the key autism-related concepts. 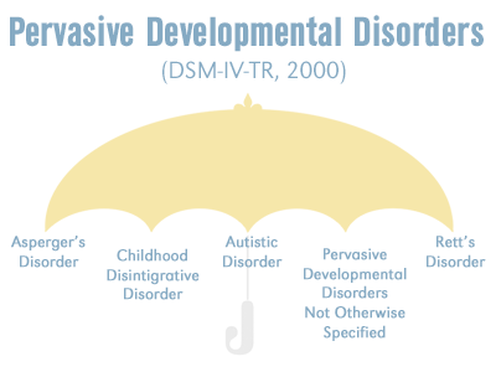 The Autism "Umbrella"
The autism "umbrella" represented the fact that many different autism spectrum disorders once fell under the larger label pervasive developmental disorders. The disorders all had slightly different characteristics, which are summarized below.

The most common disorders included:
Classic autism: Deficits in communication and social interaction, along with restricted/repetitive behaviors, symptoms before age 3

Recently, the organization that defines these diagnoses noticed the difference between disorders was subtle and many diagnoses were used interchangebly. As a result, it integrated all the pervasive developmental disorders into one name: autism spectrum disorder (ASD).
If the autism umbrella and its disorders no longer officially exist, why did I introduce you to it? There are several reasons.

One, it's a great way of visually seeing how different autistic people can be that as recently as 2013 we were saying that autistic people had different diagnoses from each other. Another reason is that many people still informally use the old labels, especially Asperger Syndrome. It's a diagnosis many see as less stigmatized than classic autism (because people diagnosed with Asperger's had no speech delay) and so many people with this diagnosis prefer to use this label.

Finally, the last reason it's a good idea to understand the pervasive developmental disorder (PDD) umbrella is because it's a foundation for understanding the autism spectrum.

As "autism spectrum disorder" is the new term being used and even the website has the word spectrum in it, you may be gathering that this whole spectrum concept is an important one, and you'd be right to think so.

No two people are alike, and nowhere is that more true than on the autism spectrum. You may have someone who does not verbally communicate, doesn't socialize well, and has a low IQ score (which doesn't mean they're not intelligent, by the way). On the other hand, you might have someone who speaks typically, can "pass" when socializing, and has a very high IQ. Both are equally autistic, but they fall on different ends of the autism spectrum. And most people fall along the continuum between the two. Because of this, autistic people are often referred to as being "on the spectrum."

A separate, but similar, concept that you may hear referred to is the concept of functioning. Autistic people are frequently referred to as "high" or "low" functioning. That basically relates back to where they're seen to fall on the autism spectrum. If they fall more towards the more "severe" (their words, not mine) end of the spectrum, they're called "low-functioning". If they fall to the "mild" end of the spectrum, they're called "high functioning". The reason this is in quotes is because many people (myself and Caley included) disagree with the use of these labels on the grounds that they over-simplify and stigmatize some autistic people, among others. For that reason, while I wanted you to understand the label, I would not recommend using it. 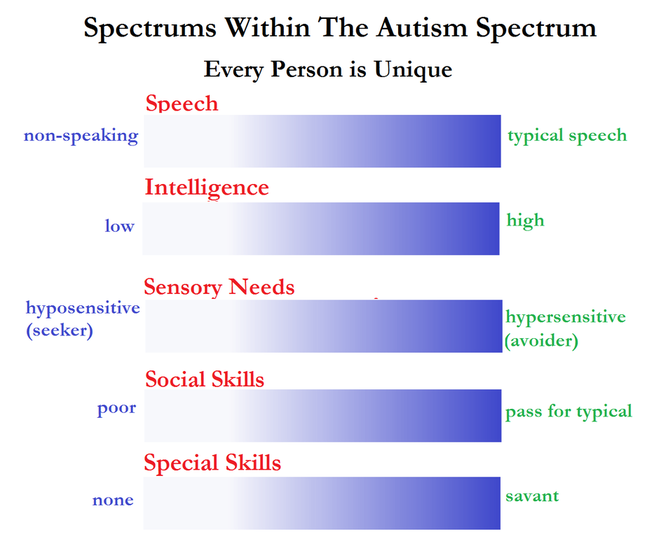 *This picture is of my own creation - feel free to copy it and use it for yourself! Giving me credit is preferred, but not necessary. :)
In fact, there are spectrums within the autism spectrum, as illustrated above and in the video. For instance, someone on the autism spectrum might be labeled "severely autistic" or "low functioning," but have an extremely high mental capacity (yet another reason people object to the functioning labels).

Done with this section? Move on to the next article, Characteristics, to learn more about the specific traits of autism that are important to understand, but whose connection to autism may not be immediately apparent. Read on to learn more.
Photo used under Creative Commons from madmiked