The Ten Tenets of Autism 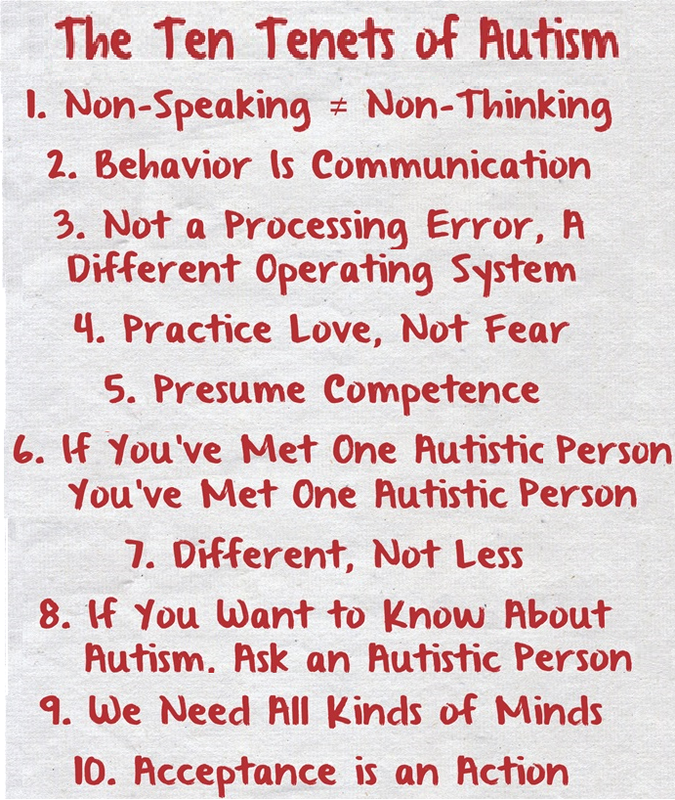 What it means:
Different not less means exactly what it sounds like - realizing that autistic people are different, but not any lesser beings compared to neurotypical people.

The point:
All too often, narratives about autism paint autistic people as inferior human beings. To listen to some, you wouldn't even realize autistic people were human beings at all. But just like the rest of us, autistic people are, well, people. They live, they love, they contribute to our society, and while they are different, they are no less valuable than anyone else.

What it means:
This one can be a bit confusing at first glance. It means even if you've met or known one autistic person, that doesn't mean you understand autism as a whole. If you're lucky, you might understand that particular person, but since autism is a spectrum of very differently impacted individuals you cannot take your knowledge of the one or however many individuals you know to mean that you understand everyone on the spectrum.

The point:
I see the need for this a lot within the community. Friends, relatives, and even simple acquaintances of autistic people (at one point myself included) often see their relationship to that person as meaning they understand autism.

3. Autism: Not a Processing Error, a Different Operating System

The point:
Just the same way as the difference between these phones comes from their operating systems, so too does the difference between autistic and neurotypical brains come down to fundamental wiring. Metaphors like this one (and the hairdryer vs toaster metaphor) emphasize that autistic people are, building off one of our last metaphors, 'different, not less.'

And the last message of this metaphor is that autistic people's brains may have to work differently to get at the same result. Their minds may do some things better than neurotypicals' minds, have more trouble with other things, and just have to approach some areas from a completely different angle.

Take, for instance, language and communication. Anecdotally, a lot of people on the spectrum seem very gifted with writing poetry (check out Judy Endow's blog for some great examples). Yet, many struggle with expressing themselves with spoken language, especially when under stress. They may have to use other techniques to help them communicate. It's a different way of going about it, and certainly more difficult, but the end result is still the same - communication.

What it means:
Exactly what it sounds like - that we should focus on our love for the autistic people in our lives, not our fears for them.

The point:
Focusing on love, not fear, has to do with the paradigm you view the world through. Media coverage and a lot of discussions within the autism community focus on fear. Fear of what that missed milestone means, fear of your child never being independent, fear of lost connection with your child, countless fears and 'what ifs'. Given the messages of fear those new to the community are bombarded with, it's not surprising how terrified they can feel.

But this tenet turns that culture of fear on its head. It asks, what if instead of focusing on fear, we focused on our love? It's not saying that the fear doesn't exist, but it's choosing an infinitely more productive thing to focus on - love. Focusing on love, not fear, not only feels good for parents, but also passes on that message to their children. Because if your child picks up on your fear, it can lead to self doubt. Picking up on your love, however, can only lead to good things.

For an example of this tenet at work, check out Jess at Diary of a Mom's post discussing how she sees the possibility of her daughter living at home her entire life. You don't want to miss it, trust me.

What it means:
When you see, meet, or think about someone on the autism spectrum, assume that they're competent. Treat them with the same respect for their skills, their age, and their humanity as you would anyone else.

The point:
The "presume competence" message mostly exists to combat the "presume INcompetence" message that most people are taught to default to. When someone meets or thinks about an autistic person, often what they envision is someone with low IQ who can't interact with others. Even if that was the case, that doesn't justify the sheer infantilization (devaluing of abilities and treating a person as a child) that occurs. But even more than that - it's not the case.

It bothers Caley deeply when people meet her and assume her lack of abilities just because she's autistic. They switch to baby speak, use short words, ooh and aw when she says something (read more about her experiences with that here), and generally treat a woman in her twenties as though she's three. This is the attitude MANY people default to as soon as they hear the word "autistic" or even simply sense disability.


It's not appropriate to default to presuming incompetence in this manner. Caley is a (mostly) independent woman who is about to graduate from college. And, yet, when we sit in the dentist's office, as soon as Caley mentions autism they hand me HER consent form, saying they assumed she's not competent to fill it out herself. THIS is why we need to presume competence: to battle this pervasive and downright offensive tendency to do the exact opposite.

6. The World Needs All Kinds of Minds

What it means:
What it sounds like - our world benefits from having people in it of varying neurologies.

The point:
We often speak of a world in which increasing numbers of autistic people are referred to as a Bad Thing. 'It's an epidemic, a tragedy, whatever shall we do?' the media chants. Yet, what people fail to realize is that a world without autistic people is an infinitely lesser world.

Just to cite some famous examples, where would the world be without the works of Nobel prize winners Einstein or Vernon Smith? How about Daryl Hannah, the actress from Kill Bill, or Adam Young, the musician from Owl City? What would childhood for my generation have been like without Pokemon, created by Satoshi Taijiri and inspired by his special interest? How would the cattle industry look without the ethical designs of Temple Grandin? I think we can all admit that the world would be a lesser place without any of these people, many of whom have explicitly credited being autistic with allowing them to achieve their success.

This benefit doesn't just come from the people who are at the tops of their fields or have written famous books, though. Just as even those neurotypical people who aren't famous contribute to our world, so, too do autistic people. Can you imagine your life without the autistic people you know? I can tell you that the world would be lacking if even so much as one autistic person I know were removed from it. I cannot bring myself to imagine a world without Caley, without the children I've cared for, without the friends I've made, without the parents I've met...but I know it would be an infinitely lesser place.


The world benefits from having all kinds of minds within it, and autistic people's minds are a part of that tapestry.

What it means:
Behaviors - such as movements and noises - are ways of communication that have meaning.

The point:
"It's just a tantrum." "Quiet hands!" "He doesn't talk, so I have no way of understanding what he wants." These are phrases that are commonly said to or about people on the spectrum. They all also fail to realize one important thing: behavior is communication.

In a community where many members struggle with spoken communication, understanding this tenet is critical. Stims, tantrums (and meltdowns, which is often what that 'tantrum' is), screams, heck, even self injurious behaviors, these are all forms of communication. They may not be desirable forms of communication, but they are communicating important things nonetheless. Stimming can be an indication of joy or being overwhelmed - and if you watch the stims you can probably tease out which is which. Screaming is a very clear way of saying NO I DO NOT WANT THIS! Self injurious behaviors, even, can be a form of communication, if a harmful one, and listening to them can help you determine the source of distress and address it to help reduce the injuries as well.

The point is, behavior is communication, and we should do a better job of listening to it.

What it means:
Just because a person doesn't communicate via speaking doesn't mean that they're not worthy of respect.

The point:
Non-speaking people's humanity is pretty consistently underestimated. "They're in their own world," we're told, as though somehow that person isn't sitting in the same room as us. More than any other group of autistic people, non-speaking people suffer from a lack of presuming competence. We talk about them as though they can't understand us and say their words can't possibly be their own when those who can do so write an essay. We make it clear that they are Not. Like. Us. and that they are lesser in every way.

The point of this tenet is to show that, in fact, non-speaking people are thinking human beings, just like speaking people. And just because they don't communicate through speaking does not mean that they're not intelligent. Some people are, some people aren't, just as with any other group of people, but you can't make that assumption just by looking at a person.

9. If You Want to Know About Autism, Ask an Autistic Person

What it means:
Autistic people's words are hugely valuable in helping people understand what it's like to be autistic and we need to recognize that.

And, yet, autistic people's perspectives are rarely sought out. Even when they're stated, often the reaction is to shut them down, to say "You are not like my child, so you can't talk!" (To read about the response to this - We Are Like Your Child - check out Autistikids' page on the subject here.) Funnily enough, this is never said the neurotypical autism experts, who TRULY are not like autistic people.

Autistic people are communicating their perspectives - if we want to understand what it's like to be autistic, we need to listen to them.

10. Acceptance is an Action

What it means:
Accepting autistic people for who they are isn't stopping the fight - it's taking up the most important fight of them all.

The point:
People often shy away from the autism acceptance movement because they say it feels like giving up. But as Jess at Diary of a Mom says, it's not stopping the fight. It's redirecting it. Acceptance means instead of battling against your child's autism, you battle for your child in a world that isn't currently made to accommodate them.

We fight for a society that doesn't read autistic and think 'we're not going to give her the job.' We battle for a world that sees an autistic person for all of who they are, instead of only their deficits. We lead the charge for a place where my sister can say she's autistic and not have others pass judgments on her abilities. Where she can get married and have children - likely autistic - of her own and raise them in a world that accepts them for who they are. THAT is what we fight for. It's the furthest thing from giving up as you can get - it's taking the action to move the fight from one individual to battling on a world-wide scale for that individual.


The fight will be hard, but it is more than worth our efforts.
Photo used under Creative Commons from madmiked